Skip to content
Conservative activists have launched a cross-country bus tour in support of Amy Coney Barrett, who...

Conservative activists have launched a cross-country bus tour in support of Amy Coney Barrett, who has been nominated by President Donald Trump to the US Supreme Court.

The group, Concerned Women for America, attended the nomination announcement in the White House Rose Garden on September 26, which ended up being a coronavirus super-spreader event.

Guidelines from the Centers for Disease Control and Prevention advise quarantining at home for 14 days to monitor any symptoms.

Instead, the women are traveling in a bright pink ‘Women for Amy’ bus and will make 40 stops in 12 swing states, including a prayer event on Capitol Hill. 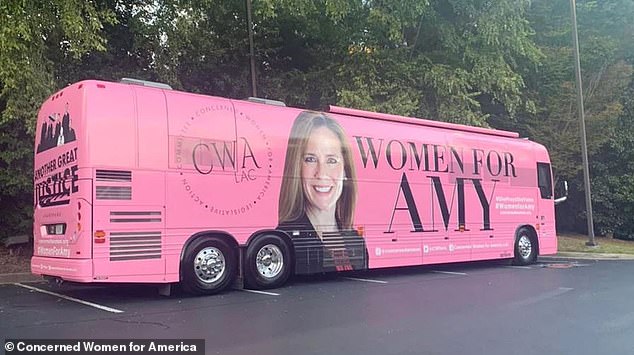 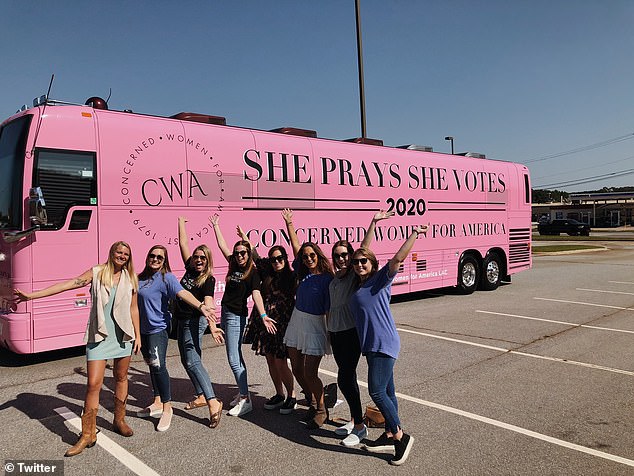 The group is traveling in a pink ‘Women for Amy’ bus and will make 40 stops in 12 swing states, including a prayer event on Capitol Hill (above)

‘2020 is the year of conservative women where we see the first constitutionalist conservative woman nominated to the Supreme Court,’ Penny Nance, CEO and President of Concerned Women for America, said in a statement.

‘I am looking forward to meeting with and educating conservative women across the country showing our support for Amy Coney Barrett and affirming that she is indeed the right one to be confirmed to the highest court in the land.’

The bus tour kicked off on October 7 near Atlanta, Georgia, with Sen. Kelly Loeffler (R-GA) in attendance.

Loeffler, who was also at the White House event, said she tested negative for the virus, but was seen during the bus tour without a mask.

Photos from stops in Spartanburg, South Carolina and Raleigh, North Carolina, also featured those in attendance in few masks and little social distancing.

It is unclear if any women on the tour have been tested for COVID-19, which has killed more than 212,000 Americans.

Concerned Women for America did not immediately reply to DailyMail.com’s  request for comment on whether or not any COVID-19 protocols are in place.

This is not the first time the group has launched such a tour.

In 2018, the women traveled around the country after Brett Kavanaugh was nominated. He was eventually confirmed to the Supreme Court by a slim majority. 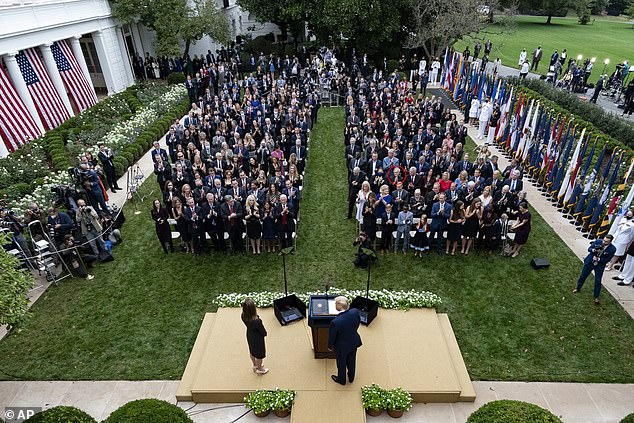 Some members, including the group’s president and CEO, attended an event at the White House now deemed a super-spreader event. Pictured: Trump (center) stands with Judge Amy Coney Barrett in the Rose Garden on September 26 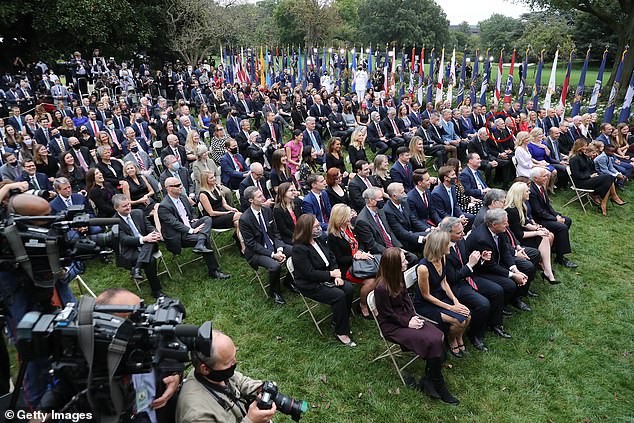 The group has refused to say what COVID-19 protocols , such as masks and social distancing, are in place. Pictured: Guests watch as Trump introduces Coney Barrett

‘If we learned anything from the confirmation process of Brett Kavanaugh, it’s that the left will stoop to anything,’ Nance said in a video message.

‘The attacks on her faith, the anti-Christian bigotry isn’t just attacks against her. It’s an attack on you. That’s why Concerned Women for America is going to hit the road.’

It is not clear how the tour is being funded.

However, in the past, the organization received donations from the the Judicial Crisis Network, which allegedly paid $12 million for ads supporting Kavanaugh, reported The Intercept.

Nance’s now support of Trump is a turnaround from her views in 2016, during which she signed a letter asking those voting in the Iowa caucus to ‘support anyone but Donald Trump,’ according to The Washington Post.

‘He has impugned the dignity of women…and has through the years made disparaging public comments to and about many women,’ the letter read.

*Remaining stops to be confirmed