Skip to content
The next phase of the Boston Public Schools reopening plan has been delayed because the...

The next phase of the Boston Public Schools reopening plan has been delayed because the city’s coronavirus positivity rate has climbed higher than 4 percent.

Boston Mayor Marty Walsh made the announcement on Wednesday, saying: ‘We believe it is prudent at this time to pause the school reopening plan.’

Preschoolers and kindergartners who were scheduled to report to school the week of October 15 instead will now start October 22.

Walsh said the date is dependent on how the virus data develops between now and then. 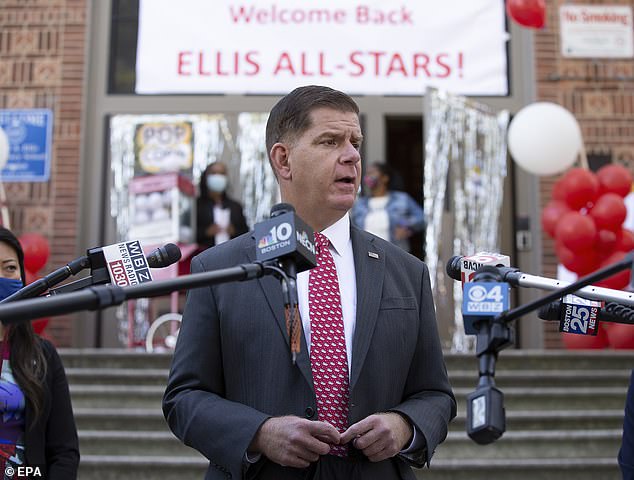 He called it a difficult decision given the benefits of in-person instruction.

‘I understand the importance of having school for our young people,’ he said.

Remote learning began on September 21 and families were allowed to opt for hybrid learning scheduled to start this month.

Some students, including those with special needs, English learners, those experiencing homelessness, and those who are in state care have already been allowed to return to in-person classes.

They will continue to be taught in person, the mayor said.

‘For many of these students, not being in school presents a risk that cannot be mitigated the way that the risk of COVID can be,’ Walsh said. ‘The risk of moving backwards, that is very difficult to recover from.’ 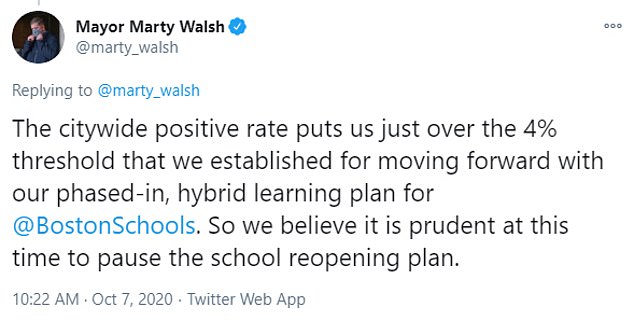 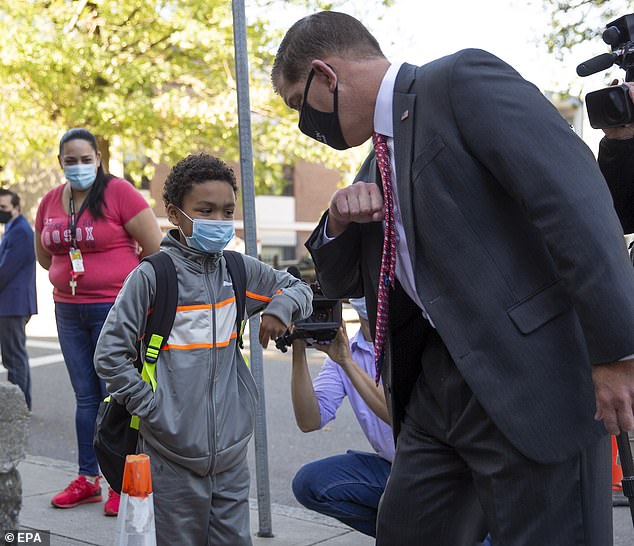 Massachusetts is among the hardest-hit states, with at least 9,323 COVID-19 deaths and more than 133,300 confirmed cases.

There have been more than 17,700 cases and 764 deaths in Boston alone as of Tuesday, according to Marty Martinez, the city’s chief of health and human services.

The average positivity rate for the seven days ending Saturday reached 4.1%, the highest it’s been since early June, Martinez said.

The Boston Teachers Union welcomed Walsh’s decision, but called for the city to do more to ensure that city schools are safe.

‘In light of the positivity rate exceeding 4 percent, consistent with and in part resulting from troubling statewide and national trends in COVID-19 spread, we support the postponement of broadening in-person learning within the Boston Public Schools that the Mayor announced today,’ union President Jessica Tang said in a statement.

She called on the city to release the results of school air-quality tests, and asked for independent facility inspections to ensure the safety of students, staff and parents. 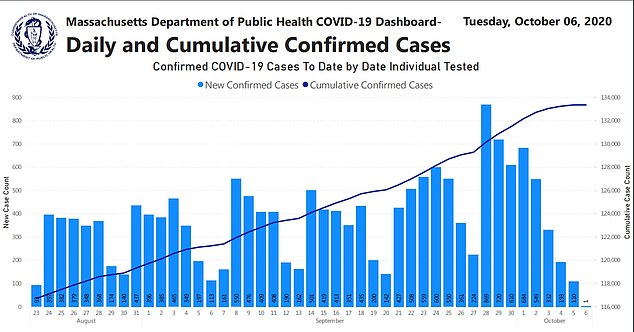 Massachusetts is among the hardest-hit states, with at least 9,323 COVID-19 deaths and more than 133,300 confirmed cases. Pictured is the state’s daily confirmed cases from August