Skip to content
Like nearly every new mother, Sanpri Purdy-Porter was exhausted after giving birth. Breastfeeding while recovering...

Like nearly every new mother, Sanpri Purdy-Porter was exhausted after giving birth. Breastfeeding while recovering from a Cesarean section was difficult, and the North Carolina physical therapist didn’t get the help she needed to nurse successfully.

“With my first child I definitely lacked support and knowledge for breastfeeding,” said Purdy-Porter, who is Black. “I was going crazy trying to pump and nurse, not knowing if I was doing things in order. When I went to an outpatient lactation consultant, she told me to just give formula and make my life easier. She gave me an out, so I took it. My son got only two weeks of breastmilk.”

Purdy-Porter’s story is far from unusual. Despite overwhelming evidence that breastfed babies have lower risks of numerous infections and health conditions, mothers in the United States don’t meet the American Academy of Pediatrics‘ or the World Health Organization‘s recommendations. They advise new mothers to breastfeed exclusively for the first six months of an infant’s life, and once solids are introduced, at least up to the child’s first birthday. (The WHO recommends two years.)

While all racial groups in the U.S. fall short of the recommendation, Black mothers are less likely to breastfeed their babies than white mothers. According to the Centers for Disease Control, in 2016, only 74.0% of Black infants were breastfed for any length of time, compared to 86.6% of white infants. And just 48.6% of Black infants were still being breastfed at six months, compared to 61.5% of white infants.

By breastfeeding less, Black women also fail to receive the corresponding health benefits for the mother, such as a decreased risk of breast and ovarian cancer.

The effects of bias on breastfeeding

“The impact of systemic racism has been significant and deadly for Black mothers, birthing people and their babies,” said Ifeyinwa Asiodu, an assistant professor at the University of California, San Francisco, who’s also a registered nurse and lactation consultant. “Systemic racism, bias and inequitable access to maternity care practices and resources supportive of breastfeeding and chestfeeding are key barriers impacting Black women and birthing people.”

Here’s how that bias affects Black women and their infants: CDC data shows that hospitals serving neighborhoods with large Black populations are less likely to offer maternity care that’s proven to increase breastfeeding rates. This includes helping women breastfeed within an hour of giving birth, having lactation consultants available and avoiding formula supplementation for breastfeeding babies unless there’s a medical reason. While the study didn’t pinpoint reasons for the disparity in maternity care practices based on neighborhood racial composition, its authors recommended further research to identify those barriers.

To further compound the problem, at least one study found that Black mothers were nine times more likely than white mothers to be offered formula in the hospital.

Once home from the hospital, Black mothers are also more likely to have to return to work earlier than the 12 weeks of unpaid leave offered by the Family Medical Leave Act — or sometimes even before six weeks — making it difficult to establish breastfeeding at home. When they do go back to work, Black mothers are more likely to have inflexible work hours and duties that interfere with pumping time. This, despite the fact that the Affordable Care Act requires employers with 50 or more employees to provide time and space for employees to pump milk.

There’s also a historical component to the relationship between Black women and breastfeeding. During slavery, Black women were often forced to be wet nurses for their master’s white children and wean their own children early and return to work. This connection with slavery has been mentioned in studies of Black women’s perceptions of breastfeeding. In communities where few, if any, Black women have breastfed, Black mothers who want to breastfeed can face anything from a lack of support to outright disapproval.

“Historically, Black moms were not allowed to breastfeed their own babies,” said Courtney Lomax Polk, a labor and delivery nurse and lactation consultant. “Combined with the predatory marketing of formula companies, many of our parents and grandparents believe that formula is best. Many of them have never seen a baby that’s thrived on breastmilk alone. At one point, breastfeeding was for poor people and it was a status symbol to formula feed because you could afford it.” 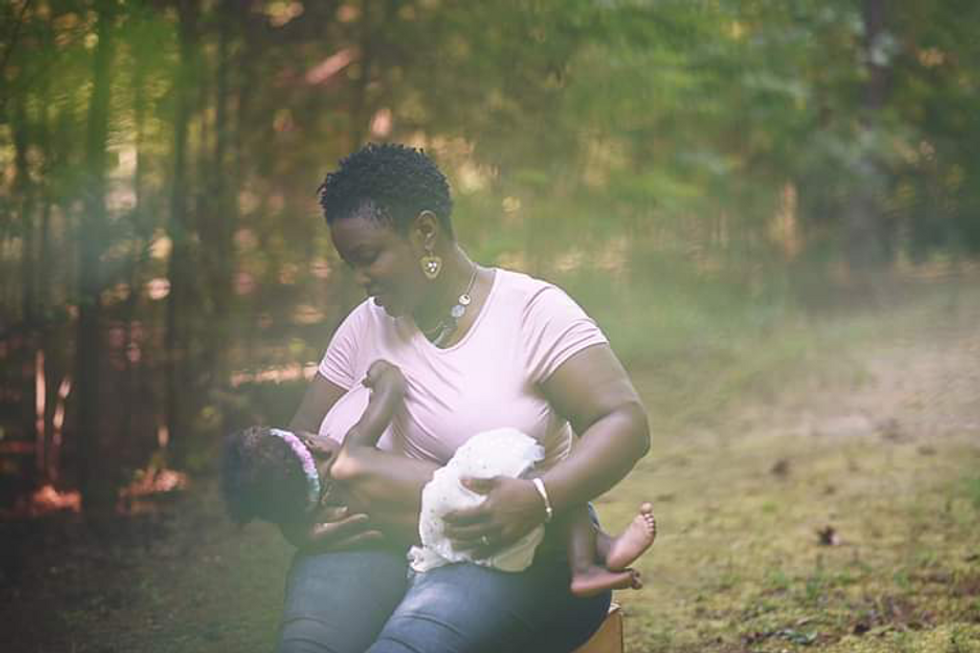 Purdy-Porter joined Facebook groups for Black breastfeeding mothers because she wanted to be more successful breastfeeding her second child. She said they provided accurate advice that she shared with her husband and her mother, both of whom were not always supportive of her exclusive breastfeeding goal. Despite her second son having a low birthweight and needing a weeklong NICU stay, she successfully breastfed him for eight months.

When Purdy-Porter had her third child, she felt she finally got it right — even after health care providers tried to get her to supplement with formula in the hospital.

“I’m almost two years into nursing my little girl,” said Purdy-Porter, who’s now considering becoming a peer counselor or lactation consultant herself. “She’s been the healthiest of all three of my kids, with only one ear infection and a couple of small colds.”